Della always dreamed of owning a bakery and catering service. But the fate of her dream come true rests on how well her business, Cupid’s Catering Company, pulls off the wedding of the decade.

As she and her team work their magic in the kitchen, the lavish affair takes a troubling turn. The bridegroom has vanished, but in a strange twist of events, she’s the only one who’s concerned about his disappearance.

As rumors that the groom-to-be caught a case of cold feet and whisperings about his ties to unsavory characters swirling, Della trades in her chef’s hat for a sleuth fedora and follows the clues.

Can she find the bridegroom, save her bakery, and fend off her mother’s matchmaking attempts before it’s too late? 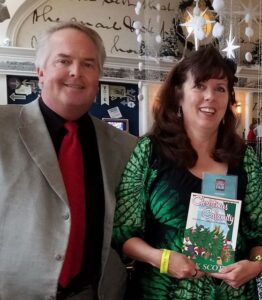 M. K. Scott is the husband and wife writing team behind The Painted Lady Inn Mysteries, The Talking Dog Detective Agency, which is set In Indianapolis, and The Way Over the Hill Gang series. Morgan K Wyatt is the general wordsmith, while her husband, Scott, is the grammar hammer and physics specialist. He uses his engineering skills to explain how fast a body falls when pushed over a cliff and various other felonious activities. Morgan’s daughter, who works at a hotel, has contributed a guest horror tale or two to fuel plot lines along with housekeeping details. Overall, the series are a family effort.