Welcome to author Catherine Wright,  we thank her for taking time away from her fur-pets to answer a few questions for us.

Do you write under a pseudonym?

Catherine Wright is my pen name for books Witch Way to Amethyst Bay, One and Two. I was advised by a few cozy mystery and romance authors to consider a pen name as not to “confuse” consumers who may be familiar with my regional history books, lifestyle magazine articles, and my former wine writing and blogging. I liked the idea of a pen name as it gave me “permission” to be whimsical, extreme, and even silly instead of always writing factual subjects such as history and wine tech notes.

However, my pen name isn’t that far from my real name. I had a great-great-grandmother by the name of Catherine who was born in Ireland and later moved to Scotland to be married. The last name of Wright is an anglicized version of the Scots Gaelic clan name of my true maiden last name.

Always! Hopefully, none of your readers are psychiatrists who specialize in auditory hallucinations or they may come looking for me with a straitjacket. The truth is I don’t force Aunt Dorte or her nieces, The Bell sisters; Holli Jayne, Gemi-Kaye, or Poppy Loo to chat with me. Lately, I can’t even get the killer to talk to me. He or she is usually taunting me by now. Sometimes they talk when I am doing just simple chores like washing dishes or when my head is on the pillow ready for a nap. A few times they have woken me up in the early morning making me scramble to the keyboard before I forget their conversations.

Currently, as I am working on my Book Three of Witch Way to Amethyst Bay, and my characters aren’t talking to me a lot. I think they are mad at me. Like most people, the COVID quarantine of 2020 has been a disruptive time in my life. I currently have two books I am working on: the third book of Witch Way to Amethyst Bay, and also my third regional history book. I am behind, but harder on myself than my editor is regarding the history book. At least I have the cover designed and ready for the third book. Now I just need to finish about 14 chapters.

Were you a part-time writer before you became a full-time one? For how long?

It’s more like I was an “unpaid” writer before I became a paid writer.
Since I was a kid I was always writing little stories. When the internet blog format was introduced in the late 1990s, I was intrigued. Eventually, in 2005 I started a wine blog for the fun of it and before I knew it, it gained popularity. From there I was getting hired to write wine articles, and later history. There are days I am a part-time writer and days when I am a full-time writer working overtime. Unless I have a deadline by another party waving a paycheck at me, I like to write for fun – like with the Witch Way to Amethyst Bay series. It’s my baby.

Do you ever Google yourself?

It’s not something I do often. Maybe once every 15 to 24 months. I forget. After 2005 when my wine blog gained popularity, I still had not Googled myself – my real name. One day I received an online message from my brother, “Good lord girl! Have you Googled yourself? I just Googled you and I quit after 10 pages reading things all about you.” I knew he was proud of me, but since I was his kid sister, he wasn’t going to admit it. Later I did Google myself and was surprised. And as I am being interviewed for this, I thought I should Google my pen name. I don’t believe I have ever Googled my pen name before. Thanks for the reminder.

Write, write, write, and then write some more. I would tell anyone who is looking to be published to just start writing. It doesn’t matter if it’s poems, prose, haikus, or even incomplete sentences. Write. Write at least 100 words a day. Use writing prompts that can get the creative juices moving. Write using computer programs like Word or Google Docs. Write by hand in a journal. Design, whether virtual or real corkboard featuring note cards and photos about your fictional story. For myself I have found corkboards with various colored “sticky notes” of my characters, the businesses on Main Street, Amethyst Bay, Oregon is helpful and even assists me in developing the story.

What are your favorite childhood books?

When I was in third grade I fell in love with a book, Little Witch by Anna Elizabeth Bennett. The book was originally published in 1953 and later in 1961 by Scholastic Book Services. In grade school whenever it was time to order Scholastic books, my parents would sit down with me and help me order several books, especially just before summer vacation.

To this day I still have the original Little Witch book, no matter that it is falling apart. Later I bought a second and intact of the same Scholastic book. In 2013, the 60th Anniversary copy of Little Witch came out, and of course, I couldn’t wait to get it in my hands. Perhaps, Little Witch was calling my name so that someday I would write my own stories about “little” witches. 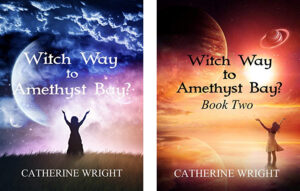 Catherine Wright was born and raised in the neighborhood where the great Columbia River flows through one of the largest and most spectacular basalt water gaps created by a massive known flood more than two million years ago. When Catherine isn’t writing, she enjoys experimenting with recipes, collecting vintage decor, tending to her rose bushes and herbs, talking to the moon, and watching Bette Davis movies. Most of all, she enjoys hanging out with her animals – one wise and noble cat and two furry little dogs.

Where to Find Catherine Wright & Her Books: