On a cold March day, Ria Quinn, amateur archaeologist, arrives in Shokan Falls in upstate New York to claim an inheritance—but who was Aunt Harriet, her benefactor? No one she has ever heard of!

Ria discovers there is a mysterious, prehistoric stone circle in the nearby woods that has an impossible connection to the girl’s boarding school her aunt attended thirty years before. Along with this, on her first day she finds a dead body in the snow, gets an anonymous call in the night, and encounters a set of quirky townspeople with too many secrets. How is she supposed to make sense of any of it? When a second victim is found, Ria wonders if she should just return to London, where until recently she had a lowly job as a film researcher with no dead bodies lying around, no real ones, anyway.

Yet against the sheriff’s orders that she stay clear of his work, Ria intends to find out who the killer is and what link the ancient stone circle has to her aunt’s past.

Hailey, the golden retriever who befriends her, is a joy to have near, reading Beowulf in Old English keeps her calm, and she finds the local sheriff more than easy on the eyes, even if he does find her irritating. Those things, together with the gorgeous and ancient Shawangunk and Catskill mountain ranges of the Hudson River Valley, already have a hold on her.

But her desire to get at the truth threatens someone in Shokan Falls, someone who is willing to put her life at risk. 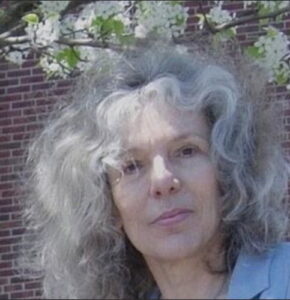 Regina Clarke lives happily in the ancient terrain of the Hudson River Valley, after many years of exploring other places. Over twenty of her stories have been published in mystery and science fiction magazines. Her novel MARI was a finalist in the ListenUp Audiobooks competition and two mystery short stories — “Calliope” and “Stopover”– were featured on The Strange Recital podcast in Woodstock, NY.  Her short story “A Magician’s Wish” received Honorable Mention by Writer’s Digest in their November 2018 anthology, and her mystery story “A Matter of Time” (the origin of her Ria Quinn Mysteries series) won the Reedsy writing contest.