Riley Morgan never expected to be back in his quiet hometown of Cedar Grove, South Dakota, population 3,211.

The former barista turned bookstore owner has his work cut out for him. His opening day during Memorial Day Weekend turns out to be better than expected. That is until one of his customers, local curmudgeon and drunk, Jed Nelson, turns up dead.

Jed decides to leave Riley his dog and house in his will, making him the prime suspect. Of course, there are lots of people that wanted Jed dead, from one of his ex-Wwives, to a property developer looking to cash in on his land.

Riley, with the help of his childhood friend and newfound canine companion, and his high school crush turned cop, decides to catch the killer. Can they do it before another deadly chapter is added to this mystery? 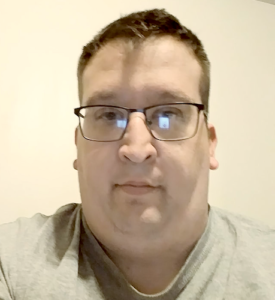 Ryan Hoffman has always had a deep passion for writing. He has a degree in Criminal Justice. He is a member of Sisters in Crime and the Guppy Chapter of Sisters in Crime. He has held a lot of jobs which bring him a lot of experience to add to his cozy mystery novels. Those range from currently working in a cafeteria to working as a stocking clerk in a grocery store. He has always had a soft spot for Mysteries since reading his first Hardy Boys we’re Nancy Drew book as a child. He graduated to devouring Agatha Christie and other mystery writers in his adult years. He currently lives in Sioux Falls, South Dakota, but grew up in a small town similar to the ones he writes about.