An adventure she’d asked for, being a murder suspect? Not really.

A solitary inn in the Scottish Highlands welcomes ten new guests. But when one turns up murdered in his own bed and the other dangles over the windowsill, all hell breaks loose. Then a mysterious heirloom goes missing. Who is responsible?

Introverted yet brilliant (former) accountant Aileen Mackinnon needs to figure out whodunnit and save her grandmother’s inn from ruin. But when someone steals a family heirloom from the safe and her guests start to drop dead, her mission gets tougher by the minute.

One-man-show Detective Inspector Callan Cameron finally has a murder to solve, but these ten new guests are not who they seem to be. Can he join forces with the new innkeeper and stay sane?

Aileen and Callan venture into a world of bloody murders, deception, and heists. The tension is high, so is the heat. They might not always see eye to eye, but can they agree: whodunnit?

Other Places to Buy 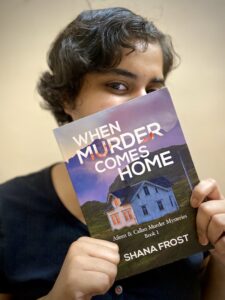 Are you looking to solve murders? Perfect, Shana loves plotting them.

As a debut writer, Shana Frost is in her secret den hatching murders and having a blast with Aileen, Nina and the gang. It’s crazy in there…

When not in the den, Shana always has her nose buried between the pages of a fiction novel. After all, the tantalising aroma of a story is far more enticing, especially for a sensitive nose like hers.

Shana’s powerful sense of smell has helped her sniff out fictional murder mysteries and a wide variety of characters.

Occasionally, she finds herself wandering ancient hallways of a castle, or a museum trying to smell the tales these walls effuse.

The traveller Ibn Battuta wasn’t wrong when he wrote, “Travelling – It leaves you speechless, then turns you into a storyteller”