Caffeine is a Killer.

After surviving two murders, and two months in business, bookstore and coffee shop owner Riley Morgan expects everything to go well. It’s August in the town of Cedar Grove, South Dakota. Summer is coming to an end, but there is one last hurray with the local Cedar Grove Apple Festival and Fair. It proposes to be a good occasion for all. Riley’s launching out his new Spiced Chai latte and Apple Cinnamon Scones.

There is trouble on the horizon though. His old college roommate and rival in everything during those four years, Evan Johansen, has decided to open up a coffee shop in town. Riley’s landlord and nemesis, Brent Larsen, seems in full swing of this. Riley hates Caffeine Crush, because it’s just another trendy coffee shop.

It makes matters worse when Evan is found dead in his shop, with a cup of Riley’s new Spiced Chai Latte nearby and this happens right after Riley is seen arguing with is Evan. It will take the help of his best friend Connor, the nosy baker lady next door, his police officer girlfriend, and his trusty pitbull, Duke, to figure this mystery out. 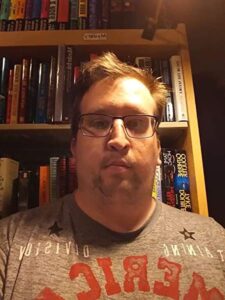 Ryan Hoffman has always had a deep passion for writing. He has a degree in Criminal Justice. He is a member of Sisters in Crime and the Guppy Chapter of Sisters in Crime. He has held a lot of jobs which bring him a lot of experience to add to his cozy mystery novels. Those range from currently working in a cafeteria to working as a stocking clerk in a grocery store. He has always had a soft spot for Mysteries since reading his first Hardy Boys and Nancy Drew books as a child. He graduated to devouring Agatha Christie and other mystery writers in his adult years. He currently lives in Sioux Falls, South Dakota, but grew up in a small town similar to the ones he writes about.