One severed head, two warring neighbours – and a cold-blooded killer stalks Much Winchmoor. There’s the murder made to look like a tragic accident, and a missing husband. Could he be victim number two?

Welcome to the Much Winchmoor Mysteries, a series set in a small Somerset village buried deep in the English countryside. It’s a hotbed of gossip and intrigue and is fast gaining a reputation as the murder capital of the West Country – and Kat Latcham has been reluctantly dragged into them all.

But she’s a reporter for the local paper – and reporters get to ask questions. Right? Only sometimes she asks the wrong question of the wrong person and finds herself in trouble.

Kat’s latest escapade does just that. And then there’s the on off romance with gorgeous farmer Will. Will they or won’t they make it to the altar this time? Burying Bad News is a murder mystery spiked with humour and sprinkled with romance.

Burying Bad News is the third in the series. The others are Murder Served Cold (#1) and Rough and Deadly (#3). All three can be read as standalone books. Paula is currently working on the fourth in the series, just as soon as she can work out who done it and why! 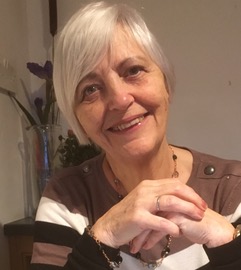 Paula Williams lives in a small Somerset village in South West England that bears an uncanny resemblance to the fictional village of Much Winchmoor, where her books are set. But that is where the resemblance ends because, as far as she knows, none of her friends and neighbours have murderous tendencies.

Paula’s two sons have grown up and flown the nest (unlike poor Kat, who would if she could!) and so now it’s just her, her husband and a rescue Dalmatian who occasionally answers to the name of Duke rattling around in the family home.