Jocie McKade: War Between the Stakes

How many private investigators have jobs just show up on their doorstep…dead? It’s actually not so unusual for Emme Mayson and Jackie Dickson. They’re twin sisters and trouble magnets all rolled into one.

Being pushed into a witness protection program, hired as private investigators by gangsters and having a ‘most wanted’ hacker living in their basement…..they should have known better, but they answered anyway.

With a four-star general assassinated on their doorstep, a barrage of gangsters and spies not far behind; there aren’t enough margaritas in town for this kind of day.

Murder, mystery and family fuel the fire between two sisters so different the only thing keeping them from starting another war between the states is the need to solve the case, get their answers and stay alive. 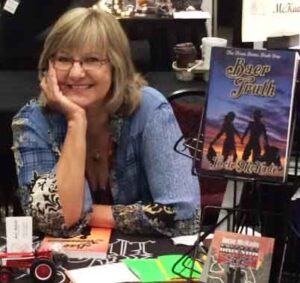 Jocie worked at several jobs before landing her ideal one as a librarian, a perfect segue to becoming an author. With over fifteen novels to her credit, her fiction writing has received the Author / Ambassador at Library Journal Self-e Authors, Winner Queen of the West Reader Favorite Award, Amazon Bestseller – Historical, Double finalist in the Next Generation Indie Book Awards in the Mystery and Humorous Categories.

Writing humorous, cozy fiction, and romantic comedy, Jocie can find humor in most everything.

With a soft spot for U.S. Veterans, she chaired her local Veterans Oral History Project, and her work with the program lead to her speaking before the project committee at the U.S. Library of Congress. She has won several awards for her nonfiction writing on a multitude of subjects.

She lives in the Midwest on Dust Bunny Farm with her family.

One thought on “Jocie McKade: War Between the Stakes”