The Smart Woman’s Guide to Murder

A faded country house in the middle of nowhere.

The guests are snowed in.

Withering and waspish, Ursula Smart (not her real name) gate-crashes her mother’s book club at an isolated country house for a long weekend retreat. Much to Mother’s chagrin. Joining them are Mother’s best friend, Mirabelle, Aunts Charlotte and Less, and Bridget with her dog Mr Bojangles. It doesn’t matter that they’ve read Gone Girl three times this year already, this retreat is their chance to escape bustling suburbia.

But someone has other ideas.

A body is found in the grounds.

Is a lone killer hunting them? Or has one of their own group embarked on a killing spree?

What they need is to stop sniping at each other long enough to solve the mystery before the killer strikes again.

What they need is a guide to survive. 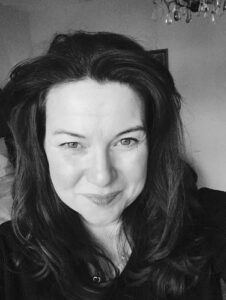 I’m a crime writer and my debut novel, The Smart Woman’s Guide to Murder, was released on 6th May by Joffe Books. It’s the first part of a crime series that is a darkly subversive take on the Golden Age and the works of authors such Agatha Christie, Ngaio Marsh and Josephine Tey.

I also write short fiction and have been lucky enough to win some awards for this. In 2019 I was awarded the Gothic Fiction prize for short fiction by Go Gothic. The piece is Vengeance and the Doctor, which you can find in the blog section here.

I live with my husband and two children and can frequently be found in Devon swimming/floating/drinking around Burgh Island, reading Agatha Christie’s. I’m originally from Yorkshire, which possibly explains the passion for all things Gothic and dark. After studying law at Cambridge University, I was a criminal law barrister for many years, but I finally hung up my wig in favour of more fictional crimes.