BOOK DEAL: Stilettos Can Be Murder by CL Bauer

“Holy Moly indeed,” Gretchen repeated. “Who would want to frame me for murder? I can’t think of anyone who doesn’t like me.”

Abby drank the remainder of the liquid in her glass. She crossed her eyes. “Don’t you? You can be a bit too much.”

Gretchen pursed her lips as though she was ready to unload on her young friend. Instead, she laughed as she looked down at Abby. “Well, what’s the point of living if you are just okay? There is never too much…too much excitement, adventure, money, or of me!”

You’re never too old to fall in love or to be framed for murder! Gretchen Malloy, the fifty-something (she’s not telling) elite Kansas City event planner stumbles over a dead groom on his wedding day. The police suspect the fashionable Ms. Malloy may be a murderer. She suspects the police don’t appreciate her flair for the dramatic or her good taste for the better things in life. One detective knows she’s not guilty, but desperately wishes he could charge the woman who gives him a headache anytime she’s near.

In a race to save her business and her life, Gretchen becomes an investigator determined to discover who is framing her. Surely it isn’t her former love who just happens to arrive in town at the same time? Her friend launching a political career wouldn’t want her in prison, would he? Would his new wife take some sort of weird revenge on her? And would the detective throw her in the clink just because of her big hair and amazing high heels?
Gretchen Malloy, supreme snoop and who usually knows everything about everyone, is in the search of her life. She’s left wondering…she may not be the only one in town with killer heels. 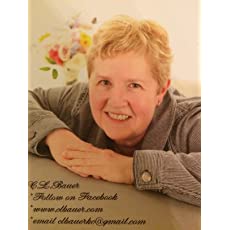 C.L. Bauer grew up and lives in Kansas City, Missouri. Her first novel The Poppy Drop, A Lily List Mystery was well received by the top 100 Books of Independent Publishers when it launched in 2018.

The series features the highly organized, post-it-note, and list-making florist Lily Schmidt. Readers have enjoyed the adventures of the mystery-loving woman and the wedding stories that are highlighted. Ms. Bauer draws on true events from her family’s own wedding and event flower business which has served families in the area for over 100 years. Clara’s Flowers has received numerous awards in the wedding world, including “best of” and “legacy winner”.

C.L. Bauer’s first love of writing provided an early career in journalism from sports reporter, to editor, and to creative department director. After a hiatus in the publishing world, she’s returned with two series. The Lily List Mysteries include The Poppy Drop, The Hibiscus Heist, The Tulip Terror, and The Sweet Pea Secret. Her next novel The Magnolia Dilemma will be published in 2021. Stilettos Can Be Murder is the first in A Lily List Mystery Exclusive which features characters from Lily Schmidt’s world, cozy but with just a little more spice!

The author enjoys her family, travel, a good book on a rainy day, bulk post-it notes, and meeting her readers. If you’ve read her novels, you already know she loves Kansas City during the holidays and a character with lots of character!