She left the big-city glamor for small-town friendships. But adjusting to the peace and quiet is turning out to be murder…

Carter Cash is excited by her future. Running a glamping and luxury yacht vacation business with her bestie, she and her retired police dog have reinvented themselves living in a yurt community. But when the bullying local queen of renovations is found dead after a public confrontation, Carter is alarmed that the cops are pointing the finger of guilt her way.

Determined not to leave, proving her innocence to the cops, the mystery show fanatic and her K-9 partner set to work sniffing out suspects. But her only real lead is the victim’s attorney ex-husband… And with him vowing to defend whoever murdered his former spouse, Carter fears digging up clues will only make her look more guilty.

Can she clear her name before the true killer slams her behind bars?

A Reign Interrupted is the humorous second book in the Law & Carter Cozy Mysteries series. If you like clever heroines, canine detectives, and close-knit communities, then you’ll love Scarlett Moss’s entertaining puzzle. 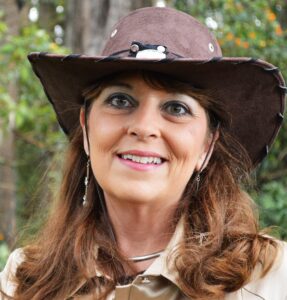 In 2014 Scarlett left the United States on an adventure. An adventure to live abroad in a third-world country where houses don’t have addresses. But she left seemingly overnight without telling anyone her plans. Then she changed her name. Again. And again. When asked why she changes her name so frequently, she responds, “I could tell you, but then you would be in danger, too. I killed those hunting me — but only in a book.”

She says she’s met some most interesting characters along the way. Some real, some maybe not so real. But she loves using her experiences and observations to color her fictional characters. If you know Scarlett, you might recognize a little of yourself in a protagonist or if you irritated her as an antagonist or victim.  With all those characters, experiences, and stories in her head, it was only natural for her to start writing some entertaining stories.

That leaves us only speculation. Is she on the run? In hiding? Does she write mystery novels because she was a criminal in a past incarnation? Or was she a spy? Is she on an undercover investigation even as we speak? Or just plotting the next book? And what about Picasso, her adoring dog. Is he really a dog? Does he speak to her or is she telepathic? Read the latest Scarlett Moss cozy mystery today to see if you can uncover the clues of who in the world is Scarlett Moss.