This week’s featured author is Victoria Gilbert. Join me in giving her a warm welcome!

I have a computer desk with plenty of space for a laptop and printer, as well as books, notebooks, and other research materials. The desk is set up in our spare bedroom, which also provides me with bookshelves, and a dresser I use to store paper, promo materials, and other supplies. The window near my desk allows me to look out over our backyard and the woods beyond. We live out in the country so I often catch glimpses of deer or other wildlife.

I don’t really require a fancy workspace, but I do need privacy. I’ve found I can’t really write with someone else in my space, which means writing in public is not for me. I need a door I can close!

How long on average does it take you to write a book?

For the last few years I’ve been completing a book every 5-6 months. It takes me about 3-4 months to actually write a first draft (typically 80 to 85K words) but I like to have extra time for plotting and completing any needed research before I begin. I also prefer to have a decent amount of time to thoroughly revise the manuscript after I finish the first draft.

How many unpublished and half-finished books do you have?

I have two completed adult Sci-Fi novels—the first two books in a planned trilogy—that are unpublished. If I ever have the time, I hope to complete the third book in that series (it’s about 25% done right now) and then revise the first two books before I indie publish them as a three-book set.

I also have a YA Fantasy (about 30% complete) that I hope to finish one day. I will also indie publish that book. Fortunately, I am part of an author co-op where I’ve republished a couple of other SF/F books after getting back my rights from my first traditional publisher.

I don’t have other complete, but unpublished, or half-finished books, but I do have numerous “shelved” proposals for mystery novels. Over the past few years, I’ve turned a variety of ideas into proposal packages—which include a pitch, a full synopsis, and the first two to four chapters of the book. (Now that I have a successful record in traditional publishing, my agent can pitch my book concepts “on proposal,” rather than waiting until I write the entire book). My agent liked these proposed ideas, but we couldn’t sell them, at least not at the present time. So I’ve “shelved” them, hoping to come back to them in the future, when and if the market shifts.

Do you write under a pseudonym? If not, have you ever considered it?

Yes, Victoria Gilbert is a pen name. I decided to use a pseudonym when I switched genres. I’d been previously published in the SF/F genre under my real name, and thought it would be best to make a clean break when I changed to writing mysteries.

However, in order to promote all my books more easily, I have republished all my books under my Victoria Gilbert pen name, and plan to write everything under that name in the future. (Unless a publisher wants me to use another pseudonym for a different type of book, which could happen).

What comes first for you, the plot or characters?

Sometimes. I often visualize and “hear” scenes in my head when I’m fully absorbed in the writing process.

Were you a part-time writer before you became a full-time one? For how long?

Yes. When I started writing professionally, I was still working full-time. I was a library director for a performing and visual arts university, which was a very demanding job. I worked at that job while writing for about three years. But when I got a three-book deal for my first cozy mystery series – the Blue Ridge Library Mystery series – I decided to take early retirement and write full-time. (Fortunately, I’d been working in my library career long enough to retire with a pension and benefits). I’ve been writing full-time for the last three years.

Start sooner! I always loved to write, but pursued other careers for most of my life, partially because I adored writing so much, I was afraid of being emotionally crushed if I couldn’t “make it.” I had to reach a point where I wasn’t intimidated by the prospect of failure before I actually attempted a professional writing career.

By the way, I always like to tell others that it’s “never too late.” I was in my mid-fifties before I completed a novel, and 58 before I was traditionally published. Now, about six years later, I’ve written 11 books, and nine of those have been, or soon will be, published. In retrospect, I wish I started writing seriously in my twenties or thirties. Think how many books I could’ve written by now! But—better late than never. 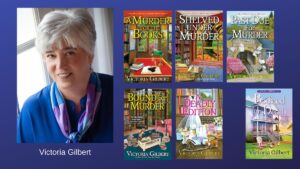 Raised in a historic small town near the Blue Ridge Mountains, Victoria Gilbert turned her early obsession with books into a dual career as an author and librarian. Victoria writes the Blue Ridge Library Mystery series and the Book Lover’s B&B series for Crooked Lane Books. A member of Mystery Writers of America and Sisters in Crime, Victoria is represented by Frances Black at Literary Counsel. She lives near Winston-Salem, NC with her husband, son, and some very spoiled cats.