Welcome to author Kristine Raymond who took time away from writing, editing, podcasting AND baking, gardening, caring for animals, all while basking in Nature’s glory to answer a few questions for us.

I write in my office which is the only space in our house that is furbaby free. Or, it’s supposed to be. The cats repeatedly leap over the baby gate installed to keep the dogs out, and the dogs stick their noses between the slats and stare at me with those ‘sad eyes’ until I relent and let them in. Yup. A space all my own…lol.

How long on average does it take you to write a book?

How do you select the names of your characters?

Ah, it’s the other way around. They select me. More often than not, when I’m writing a scene, a name will pop into my head and demand that I create a character to go with it, though on one occasion, the name of a main character came to me in a dream.

Another resource I’ve used is baby name lists found online, but when I’m really stuck, I flip through the phone book (yes, they still make them) for ideas.

What was the best money you ever spent as a writer?

Hiring a formatter. There are many aspects to getting a book ready to publish, most of which I don’t mind doing, but not formatting. The frustration I save myself is worth every penny I spend outsourcing the job. I highly recommend Paul Salvette at BBeBooks for that final step.

What comes first for you, the plot or characters?

It varies. I have a notebook filled with pages of character names that have popped into my head at one moment or another, and in that same book, there are plot ideas and snippets of dialogue and even full scenes. Though, as it invariably happens, brand-new characters and plots appear when I get ready to start a new project.

All. The. Time. Especially when I’m deep into the story. Then, they won’t shut up until the final chapter and, sometimes, not even then. Sequel, anyone?

I loved Nancy Drew, Little House on the Prairie, the Great Brain, Ramona…oh, so many! I was also head over heels for horse and/or dog stories. In fact, a majority of my childhood books are sitting on my bookshelf; either those that have traveled with me throughout the years or replacements I’ve found on eBay and Etsy.

Since aspirations of becoming an author weren’t on my radar when I was younger, my advice to myself is more generalized, though certainly applicable.

Thanks so much for hosting me on the Cozy Capers blog today. I had a blast visiting with you!

It wasn’t until later in life that Kristine Raymond figured out what she wanted to be when she grew up, an epiphany that occurred in 2013 when she sat down and began writing her first novel. Sixteen books in multiple genres later, she’s added the title of podcasting host to her resume, thus assuring that she will never be idle.

When a spare moment does present itself, she fills it by navigating the publishing and promotional side of the business. When not doing that, she spends time with her husband and fur-babies (not necessarily in that order) at their home in south-central Kentucky, reads, or binge-watches Netflix. 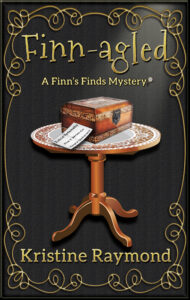 A secret message hidden inside of an antique wooden box, an unidentified dead body, and a mother determined to marry her off to the high school crush whom she hasn’t seen since…well…high school. There’s no doubt about it; Finn Bartusiak’s life in the seaside town of Port New is about to get interesting.

Coming into possession of a 19th-century, bronze and mahogany writing box under somewhat suspicious circumstances, Finn’s accidental discovery of a coded note leads her and Spencer Dane, bestselling novelist and love of her life (though he doesn’t know it yet), on a quest to unravel the mystery behind the jumble of letters. But they’re not the only ones interested in the cryptic message. There’s a con man on their trail, and he’ll stop at nothing, including murder, to claim the ‘treasure’ for himself.

*As an Amazon Associate payment may be earned for qualifying purchases, maybe even enough for a cup of coffee! ☕ Thank you.
%d bloggers like this: