Welcome to author Amy Reade who describes herself as a recovering attorney who discovered, quite by accident, a passion for fiction writing.

It’s interesting that you ask about both favorite and current writing spaces, because mine are in two different spots.

My favorite writing spot depends on the time of year. In summer and winter, I want to be in a private spot indoors, just comfortable enough (about 68 degrees), and near a window. I like to be able to look up and see the birds and what the weather is like. In the spring and fall, I like to write outdoors with no bugs. If it’s cool, I wear a sweatshirt. My patio is a great place to write because it’s usually quiet and peaceful. And no matter where I am, I like to have my dog, Orly, with me. I often dream about writing from a conservatory in the Scottish Highlands, overlooking the mountains and the lochs, but I have a feeling I wouldn’t get as much done if I were lucky enough to be writing there.

My current writing spot is my kitchen table. I have a desk, but it’s tiny and stuck in the corner of our living room, so there’s no privacy, no view, and the desk is too cluttered with other things to even think about putting a computer there. About a year ago I took over the dining room table, but that’s right at the bottom of the stairs. People are constantly coming up and down the stairs, so there’s absolutely no privacy. Plus we could no longer eat in the dining room.

I tried the couch in the living room for a while and I was comfortable there, but my two cats crawled all over me a hundred percent of the time. My writing productivity went from sixty to zero in no time flat. I also tried an armchair in my bedroom, but it just wasn’t comfortable.

So now I’m at the kitchen table, clearing away my stuff every time we have a meal. I’m right next to a window, I’m comfortable, my cats leave me alone, and I’m not in the center of the house, so I enjoy some privacy and quiet. It works for me.

At least until I get that conservatory in Scotland.

How many unpublished and half-finished books do you have?

I have one book that is half-written. It’s called Dutch Treat and it’s the second book in my Libraries of the World Mystery Series. In that series, I use library collections from around the world to solve or commit crimes. I would be lying if I said I work on Dutch Treat every day, but I think about it every day. The first book in the series, Trudy’s Diary, was released in 2019. I was hoping to release Dutch Treat by now, but other projects have taken precedence.

For example, right now I’m caught up in finishing Book 4 in the Juniper Junction Holiday Mystery Series, Ghouls’ Night Out. The publication schedule is pretty tight for that series, so I’m always working on the next book. And in June 2020 I released the first book in my Cape May Historical Mystery Collection, Cape Menace. I so enjoyed writing that book that I can’t wait to start the next one.

What kind of research do you do for a book?

I have often said that research is my favorite part of every book. If I could find a way to get paid just to do research all the time on the topics I want, I would definitely do that. The amount of research I do depends on the book I’m writing. I’ve spent time in every place where my books are set, but some places I know better than others.

My first novel, Secrets of Hallstead House, is set in the Thousand Islands region of upstate New York, where I grew up. I needed to double-check the dates of some of the events that I touch on in the book, but that was about it. I’m also very familiar with the Big Island of Hawaii (Hawaii Island), so I didn’t have to do much research for House of the Hanging Jade.

For The Ghosts of Peppernell Manor (set outside Charleston, South Carolina) and the three books in the Malice series (set in the United Kingdom), I had to do a bit more research about the settings. For The Ghosts of Peppernell Manor, I needed to know a lot about antebellum plantations—the manors, the outbuildings, the slave cabins, etc. I needed to know about the history of the Lowcountry so I could speak intelligently about its agricultural heritage. I needed to know more about the food, the people, the city of Charleston, and poisons (!). I also had to do quite a bit of research about restoring old buildings—the plastering techniques, the paints that were used centuries ago, and how slave cabins were constructed. For the Malice books, a lot of my research was about police techniques used in the UK, though I also had to become familiar with certain aspects of the history of London, Scotland, and Wales.

For my Libraries of the World Mystery Series, I have to do research about the library I feature in each book and the special collections in each of those libraries. I’ve been in each of the libraries, so I can describe them easily, but there’s a lot of information I can glean by reading about their histories.

For my historical collection, most of my research is about the way of life in Cape May County throughout its history. I also do quite a bit of reading about life in the American colonies. For Cape Menace, I had to familiarize myself with pirate lore, the history of herbalism, and religion in this part of the country. For the second book in the collection, I will be concentrating on the American Revolution and the political and social issues at that time.

And finally, for my Juniper Junction series, I have had to do some research about police procedure, jail policies and practices, and a bit of Colorado history.

I have loved every minute of all the research I’ve done.

Hmm. My favorite childhood book? How much time do you have? There were so many books I have loved from the time I was old enough to remember. Three of my favorites from my early childhood were Good Night, Little Bear by Richard Scarry, There’s a Monster at the End of This Book (starring Lovable Furry Old Grover) by Jon Stone, and Down, Down the Mountain by Ellis Credle. There was also a book with a main character named Puddle Duck, but I don’t remember anything other than that. I also loved (and still love) Heidi by Joanna Spyri.

When I got a little older, it was all Nancy Drew, all the time. I’m pretty sure I’m not alone in this. At Robinsons’ Book Store in Watertown, New York, the hardcover Nancy Drew books used to be $2.95 and I would sit on the floor in that store for hours on end trying to decide which book I wanted next. I also loved Trixie Belden, Cherry Ames, and Anne of Green Gables. I still have many of the old books, and I still read them sometimes.

I also have to mention James Herriott’s veterinary series, which is the reason I went to college where I did. I had every intention of becoming a veterinarian, but in the end I went to law school.

If only Dr. Herriott had warned me of the horrors of organic chemistry…

What’s the best advice you’ve ever gotten about writing?

My answer is easy. Six years ago this month, my first book was released. It was exciting, thrilling, and nerve-wracking, as any first-time author will tell you. I was proud of that book and all the work that had gone into it.

And then I got my first bad review.

Thank you so much for hosting me here on Cozy Capers. I have enjoyed being your guest!

Amy M. Reade is a recovering attorney who discovered, quite by accident, a passion for fiction writing. She has penned eleven mysteries and is working on several others. She writes in the Gothic, contemporary, historical, and cozy mystery subgenres and also loves to read, cook, and travel.

She is the USA Today and Wall Street Journal bestselling author of Secrets of Hallstead House, The Ghosts of Peppernell Manor, House of the Hanging Jade, the Malice series, the Juniper Junction Holiday Mystery series, the Libraries of the World Mystery series, and the Cape May Historical Mystery Collection. 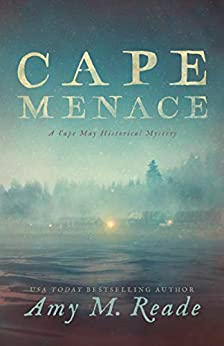 Her most recent work is Cape Menace: A Cape May Historical Mystery.