Welcome to author Amy Pershing to a return visit to Cozy Capers. You can read her initial interview here.

I am not one of those people who write best while facing a blank wall (yes, that’s a thing!). I need to look up from the screen every once in a while and see a bit of green, a bit of blue sky, a ray of sunlight on a geranium. I write at the beautiful desk I inherited from my beautiful mother, sitting in front of a window overlooking our backyard, which is really just a little glade carved out of a cedar forest. In the morning, if I’m lucky, I’ll see a momma deer come by with her fawn or a blue jay arguing with the world at large. Then I put my head down and write, write, write, looking up every once in a while to refresh myself, until in the afternoon long shadows cut across the grass to remind me that the work day is almost done. At which point, I hit “save” on whatever I’ve been working on (probably some very ingenious murder!), tidy my desk and say a little thank you to the Universe for my writing life.

Do you write under a pseudonym? If not, have you ever considered it?

I don’t write under a pseudonym, but not because it hasn’t occurred to me. There is much to be said, I think, for hiding from the curious gaze of the internet behind a made up name. The problem is, I just can’t think of one that feels like me. That’s probably a lack of imagination on my part, but I have the feeling that I am, and will ever remain, Amy Pershing.

What would you say is your interesting writing quirk?

Well, the fact that I write about murder for a living is fairly quirky, right? But other than that, I think my biggest quirk is my ability to literally tune out the world while I’m writing. I hear nothing else, see nothing else, except for the scene in my head making its way onto the page. This ability to hyper-focus is, I think, a legacy of a lifetime of reading. Even as a child, reading was my escape. And to escape into another world, you have to leave this one, at least for a time. So I got very good at that. And then I had kids and began to work from home writing employee communications for a big bank. And let me tell you, I got really good at filtering out anything that didn’t sound life threatening. And so now, it’s second nature to me to just put my head down and escape into the world of the Cape Cod Foodie.

What was the best money you ever spent as a writer?

The best money I ever spent as a writer is probably the zillions of dollars (at a conservative estimate) that I have spent on books. Particularly on mysteries. You cannot read hundreds, maybe thousands, of mysteries and not absorb how a mystery is structured, what kind of characters work or don’t work, how a clue is laid in so cleverly that the reader doesn’t even realize it’s a clue… Mysteries by the greats like Agatha Christie, Dorothy Sayers, Louise Penny, even the pseudonymous “Carolyn Keene” were my master class in writing the kind of puzzlers that I always loved.

I will never forget reading Louise Fitzhugh’s Harriet the Spy when I was ten. I loved everything about Harriet – her blue jeans rolled up at the cuff, her glasses, her classic black and white notebook in which she wrote down everything she saw and heard around her. I remember thinking, “Maybe if I did that, I could figure out why people do the things they do.” (I was a very clueless kid!).

Write what you love to read. If you don’t like reading dark thrillers, you will be miserable trying to write one. But if you love cozy or traditional mysteries, that might be a genre for you to explore.

Also, ask for criticism from your agent/editor/friends/writers’ group, not praise. Of course your book is wonderful. But maybe it sags in the middle. Maybe that one character is simply not believable. You need to know these things. And act on them. When someone suggests cutting an extraneous scene or character, they may well be right. As Stephen King so famously advised in On Writing: “Kill your darlings, kill your darlings, even when it breaks your egocentric little scribbler’s heart, kill your darlings.”

What’s up next for Samantha Barnes (aka the Cape Cod Foodie)?

Poor Sam has no idea what she’s getting into. Next summer’s Murder is No Picnic starts out nice – the discovery of the World’s Best Blueberry Buckle, plans for a Fourth of July clambake, a search for the Cape’s best lobster roll – then moves into murder by arson and finally ends up with a hair-raising rescue at sea that I’m not going to spring on Sam until the very last minute…. 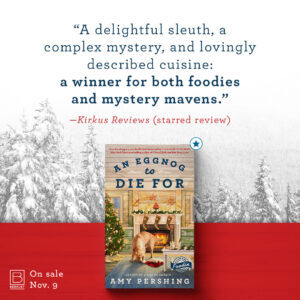 Amy Pershing, who spent every summer of her childhood on Cape Cod, was an editor, a restaurant reviewer and a journalist before leading employee communications at a global bank. A few years ago, she waved goodbye to Wall Street to write full time.

An Eggnog to Die For is the second of the Cape Cod Foodie mysteries featuring Samantha Barnes, a disgraced but resilient ex-chef who retreats home to Cape Cod where she finds herself juggling a new job as the local paper’s “Cape Cod Foodie,” a complicated love life, a posse of just-slightly-odd friends, a falling-down house, a ginormous puppy and a propensity for falling over dead bodies. A Side of Murder, which Elizabeth Gilbert called “the freshest, funniest mystery I have ever read,” was the first book in the series.  The third, Murder Is No Picnic, will be published in the summer of 2022.

◀J.J. Justice: Witch in the City
Amy Pershing: An Eggnog to Die For▶

One thought on “Author: Amy Pershing”